Exeter Gauge O Group
Watchet Mineral Line
David Fouracre’s Layout
For more years than I care to think about I’ve had a fascination with the West Somerset Mineral Railway – I hail from Milverton, not many miles from the original line. The prototype had quite a short lifetime; it was started in 1856, and closed down in 1910. The line’s purpose was to transport iron ore from the mines along the Brendon Hills ridge down to Watchet harbour for transhipment to the blast furnaces across the Bristol Channel at Ebbw Vale.
My projected model concentrates just on the station facilities at Watchet itself. In reality the line ran through the station area and out onto the quay, where the ore was tipped into barges. I’ve also used some modelling licence to presume the line continued in operation to the late 1920’s which gives me plenty of scope for Edwardian atmosphere!
The model occupies one side and one end of my dedicated workshop/railway room. I’m lucky in that the room is hard-built with serious insulation, doors to the back garden (whence it is hoped the line will progress!) and the dining room. It also has full underfloor heating – a boon on winter evenings.
Having been fairly heavily involved with the Exegog’s Hope Hall layout structure, I’ve used not dissimilar principles here: plywood sub-structures with trackbed raised off the sub-structure and allowing very fine tweaking of levels. The layout was generated using Anyrail – I found Templot a bit much for my addled grey cells. Initially I had a real head-scratching session concerning the implied sharp curve round to the end wall of the room, but my old friend (emphasis, please, on the very ‘OLD’) Bill Barnes came up with a pragmatic solution: use the corner to site a sector plate, so it can swing round and thus provide access to a three-road fiddle yard under the window. Simples! And it achieved one of my main objectives: to have gentle sweeping curves as much as possible. Here’s the more-or-less final plan – though I’ve managed to fit in a third fiddle yard road. Printing it off at 1:10 scale gave a usable grid on which to lay out the track bed woodwork.
[WatchetFeb21] )Ref the pictures below)
And here’s the prototype layout – the red rectangle area is what I’m trying to represent – with some compression, particularly regarding the loco shed location.
[Prototype-layout] (See below)
I started in the back garden by making lots of sawdust, ripping up 8x4 sheets of good quality 9mm ply (Somerset Panel Supplies, Taunton – very good, very helpful). Fixed small vertical battens along the back wall to anchor the cross-members, levelled pretty well but not final. The front of the cross members was supported by whatever they happened to be crossing: old kitchen units, jerry-built storage shelves etc. This makes the final structure absolutely immovable and also makes good use of the under-layout space. I’ve set an unusually high track level: 1330mm/52½” above floor. This means that I’m looking at the models rather than down on them – crucial for realism I feel. The fiddle yard has yet to be constructed to the left against the end wall.
[Watchet-sub-baseboards1] (See below)
The recess near the camera is to receive the control panel. In the next shot you can see the trackbed ‘risers’: ply with stripwood tops which support the final 9mm trackbed. This is where accuracy on levels is important, and with glue, screws and quick-release clamps the levels have turned out well and without grief. By the way, the hole at the end wall is ready to adventure into the garden, whenever that might be!
[Watchet-sub-base2]
Fast-forward a bit now. I decided I wasn’t much of a Turner or a Constable, yet wanted to set the scene for the railway. Now the lovely folk at ID Backscenes couldn’t have been more helpful, and before you could say paintbrush had despatched two tubes each containing two 1.5m long sections of self-adhesive backscene photos, not too dissimilar to the Brendon Hills in that part of Somerset, and producing a total length of 6.0m of rolling moorland hills. My workshop length? 5.9m! Fixing these super backscenes onto suitable board is not for the faint-hearted, and definitely not to be attempted after a night on the sauce. Anyway, I mounted them on signwriting boards, which were then glued to the painted block wall with NoNails. Voila! As far as the track was concerned, I wanted a thin underlay to reduce to some extent the rumble of tiny wheels, so opted for 3mm thick EFP30 closed-cell foam, available in many lurid colours and sizes from eFoam.co.uk. Watch the prices: the more you order the more the price per meter reduces drastically! I think two sheets 1m x 2m cost around £20. I used Screwfix contact adhesive to fix to the boards, as the adhesive retains its flexibility. As far as the track itself is concerned the WSMR was a light railway, so I bit the bullet and bought Code 100 N/S FB rail from Marcway, together with copperclad strip for sleepering. The final track is to be ballasted over the sleepers, so I decided life was too short to commission Chris Ward to 3D –print hundreds of the rather idiosyncratic chairs used on the original line.
Here’s a shot of the layout showing the backscene, underlay is down, main sector plate in place, and majority of the track laid.
[Watchet-end]
I think that’s about all for the time being – I’ve been distracted by a 20-year-old project to scratch-build ‘Jane’, the diminutive Wantage Tramway 0-4-0 loco. No great rush then …
February 2021 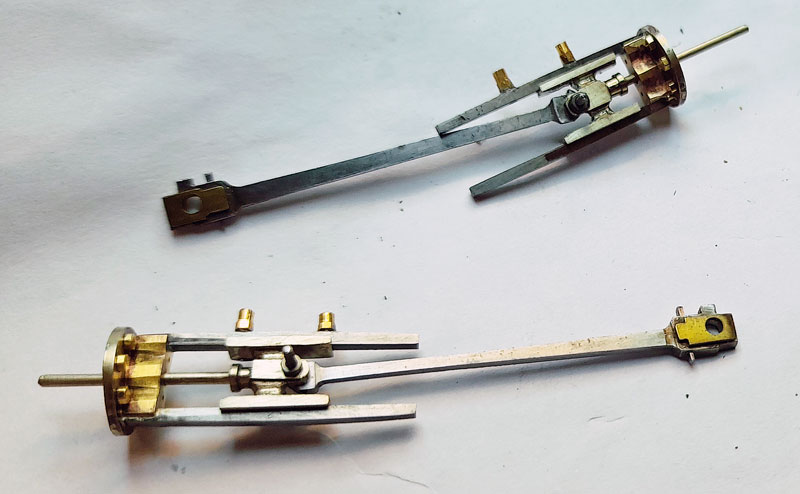 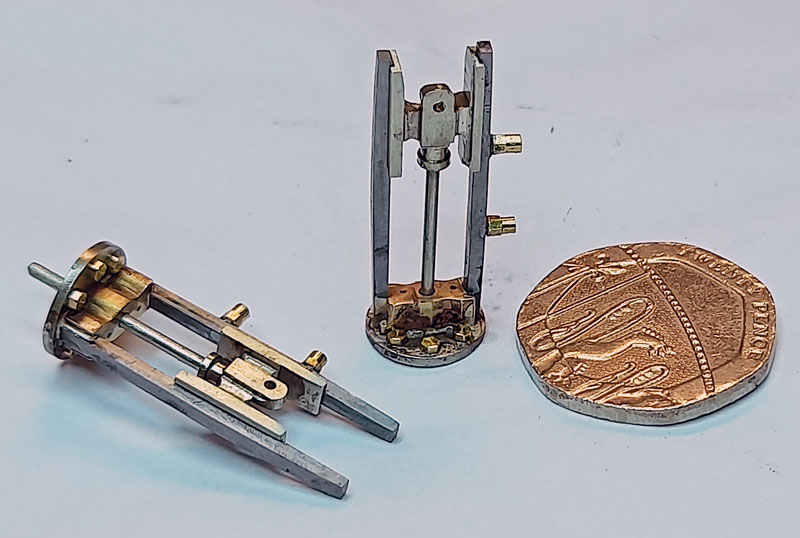 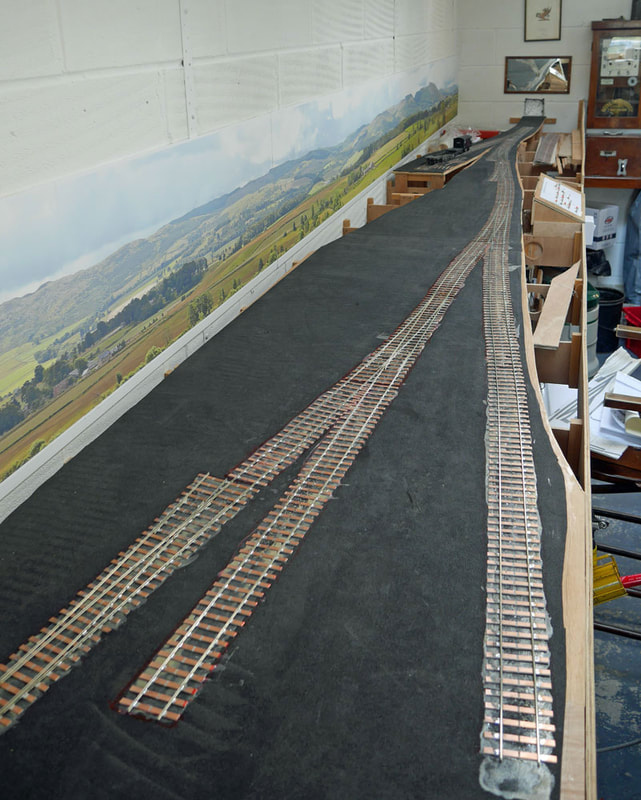 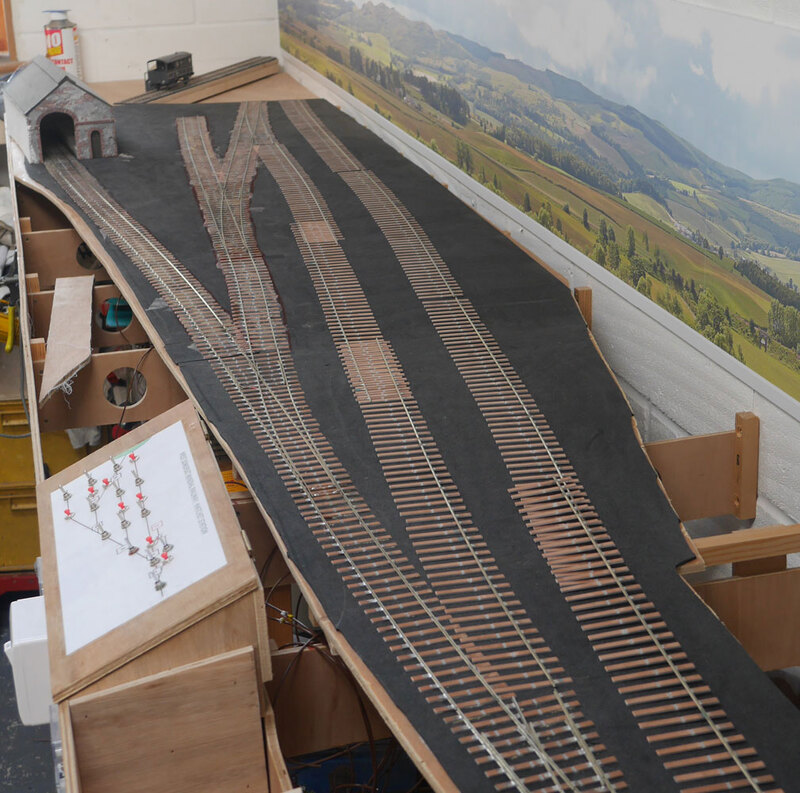 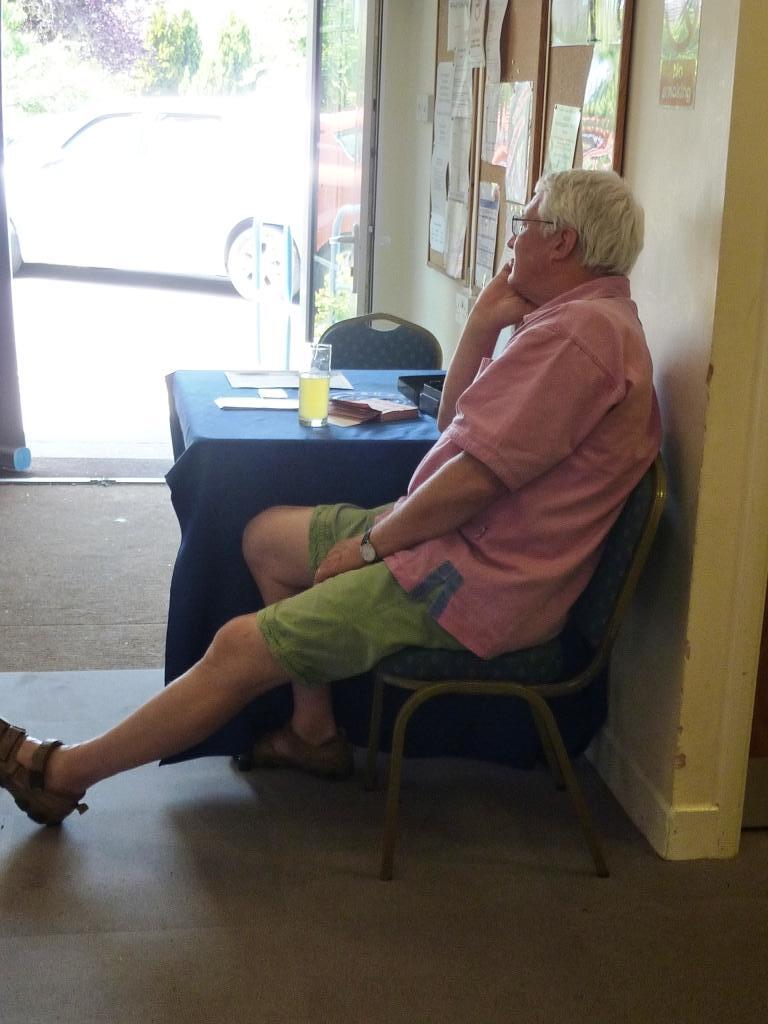